It’s time for the next part of “Chinese Characters in Marvel Comics”! Get ready!

Jade Dragon hails from China and is a mutant who can become a flying, fire-breathing dragon. 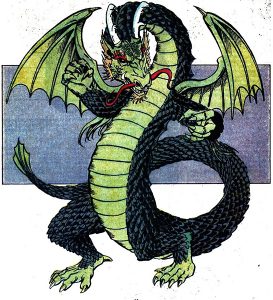 Dei Guan is an orphan, the only child of parents who were branded as intellectuals and executed during the tumultuous Cultural Revolution in China. Dei Guan was placed in a “re-education camp.” It was during one of his shifts in the iron mine that the mysterious Geomancer appeared and told Dei Guan that their ancestors believed that “dragons of jade” lived beneath the earth and lent their powers to great warriors. He then imparted to Dei Guan the power of the Jade Dragon. Using this new power, Dei Guan transformed himself into a dragon and escaped the mines. Despite the suffering he had endured, Dei Guan continued to consider himself a Chinese patriot.  Dei Guan offered his services to the country by enlisting in the army.

Dei was later seen (and retconned as a mutant) working with a group called 3-Peace to promote Chinese mutant rights along with the Collective Man and Nuwa (X-Force Annual #3, 1994). Dei Guan possesses the superhuman ability to transform himself into an enormous, superhumanly strong dragon, and back again into a human being. He retains his human intelligence when he is in the form of a dragon. The Jade Dragon possesses the ability to fly and breathe fire without harm to himself.

One of Mandarin’s allies. 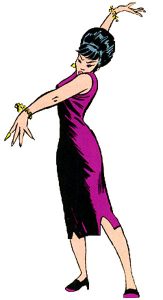 As a child, Madam Macabre was saved from a Rickshaw accident by the Mandarin. Because she had been carrying an abacus instead of a doll, the Mandarin decided that he should train her. He sent her to a Buddhist school, where she studied for years. She wanted to team up with Giant-Man, she planned to trick Giant-Man into revealing his size changing secret. When he refused, she trapped him, trying to force him to reveal the secrets of his powers. She was finally defeated by the combined powers of Giant-Man and the Wasp. She has no superhuman powers. But in order to trick Giant Man that she could shrink and inanimate objects, she used a shrinking device. But it turned out that she could only shrink things created by Gogo (her assistant) made out of a special plastic.

Fat Cobra is the Immortal Weapon of Peng Lai Island one of the Seven Capital Cities of Heaven. 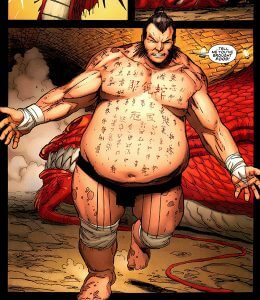 He was born 111 years ago on Peng Lai Island and had a very hard life. His mother died during childbirth and his father, a pig farmer, couldn’t possibly take care of such an immense baby, he needed eight women to nurse him every day. When he was only three months old, his father left him at the orphanage and disappeared.

When he was 2 years old, he was placed in a basket and set adrift from the Island. Peking opera school took and trained him in dance and acrobatics, as well as his first instruction in the martial arts. Fat Cobra went on to become one of the most promising young opera singers in all of China.

He first killed in a coffeehouse in Cairo in 1924, in what started out as a drunken argument. He then fled back to China and joined the army. Fat Cobra used different identities and fought for both sides in the Chinese Civil War, with both sides wanting to make him a general. He used the money he had earned to buy his way back into Peng Lai and began learning at a Kung Fu school ran by Iron-Crutch Khan. It was Khan who gave him the name Fat Cobra. He did face the serpent but lost terribly washing up on the Chinese mainland beaten to a pulp, partially eaten, barely alive. A woman saved him

After this his life became even weirder, he beat Volstagg and Hercules in an eating contest in Olympus, introduced Elvis to Kung Fu and fighting alongside Nick Fury against Russian werewolves on the moon. Later he became a part of Immortal Weapons.

Chi Manipulation and Augmentation: Fat Cobra has the ability to manipulate Chi energy. Fat Cobra can harness his spiritual energy in a similar fashion as Iron Fist does. By doing this he can enhance all of his physical attributes to superhuman levels.

Electrokinesis: He can also channel a form of lightning that he can project as a blast or to entangle others with.

Nervous System Control: Fat Cobra has complete control over his nervous system enabling him to deaden himself to pain, resist the effects of drugs or poisons, and slow down the rate at which he bleeds.

Enhanced Senses and Durability: Fat Cobra has unusually keen eyesight and hearing, but it is unclear if it extends to superhuman level.

Chi Enhanced Healing: He can use his chi to heal wounds and illness.

Dimensional Travel: Under certain circumstances, he can focus his chi to create nexus points between dimensions.

Master Martial Artist: Fat Cobra is a master of the martial arts, since he absorbed all the knowledge of his predecessors.

Acrobatics/Dance: He is surprisingly fast and nimble for his size.

Immortal Weapon of one of the Seven Cities of Heaven and a hero to all the strays on all the streets of the world. Sihing the current Dog Brother ＃1 was born in China. His parents were killed in the First Opium War in 1841, by a cannonball from a British ship, leaving him the only survivor. For the following years, he survived on the streets with his friend Sidai. He would often try to strengthen Sidai with stories of Dog Brother #1, the king of the lost, ruler of the Under City, and how someday the legendary hero would save them. He knew every detail of these stories by heart, often reciting and acting them out for Sidai’s amusement.

Slavers eventually captured them and intended to sell them as child slaves, and his friend was killed by the slavers as he attempted to resist. Sihing broke free of his bonds and fought back with all that he had learned from the stories of Dog Brother #1. He fought for revenge. He fought for his life. But he could not win. Just as he was about to be shot, men all around him were cut down by blades he could not even see. Dog Brother #1 had finally come, and he made every one of them men pay for Sidai’s death. He apologized to Sihing for not being able to come sooner and explained how there was so many out there to save. Sihing blacked out in Dog Brother #1’s arms.

When Sihing awoke, he was still on the ship, but it was now out at sea. He watched as Dog Brother #1 removed his armor, revealing a body of scars. Sidai had learned much from the stories and would learn more now by living the legends. Sihing knew how the succession happened and reluctantly beheaded the man, becoming the next Dog Brother #1. Later he became a part of Immortal Weapons. 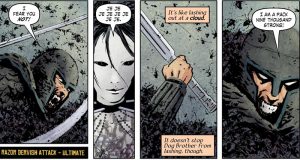 Chi Manipulation: He is unique among the Immortal Weapons in how his title and Chi is passed on. While traveling the world searching for the lost, Dog Brother will eventually find an orphan who will become the new Dog Brother. He will immediately lay down his arms and surrender all of armor and weapons to this person. This person must then strike him down, and his Chi will flow into that person, who becomes the new Dog Brother ＃1 and inherits his duties and mission. The number at the end of his name does not increase through the holders, and remains 1. He inherits his skill and chi from his predecessor.

Chi Augmentation: Dog Brother ＃1 can harness his spiritual energy in a similar fashion Iron Fist does. By doing this he can enhance all of his physical attributes to superhuman levels.

Canine Control: Shares a telepathic link with the dogs (and possibly orphans), able to command them in this way.

Nervous System Control: He has complete control over his nervous system enabling him to deaden himself to pain, resist the effects of drugs or poisons. It can also slow down the rate at which he bleeds.

Empathy: Dog Brother ＃1 has the ability to sense the emotions/feelings of people and animals.

Enhanced Durability: He can generate a chi-based “aura” radiating from his body to make himself more resilient against physical damage.

Chi Enhanced Healing: He can use his chi to heal wounds and illness.

Dimensional Travel: Under certain circumstances, he can focus his chi to create nexus points between dimensions.

A Triad boss of Mandarin City who ruled it after the Mandarin’s death until Tony stark brought his reign of terror to an end. The man who would call himself Lord Remaker was a warlord that claimed the Mandarin City after the Mandarin died.  He commanded numerous triads which protected the city from anyone who wanted to interfere; however, he was stripped from his power when Tony Stark decided to rebuild the city into a futuristic utopia (Troy). The Remaker Ring of the Mandarin found him and considered him a suitable host to become the Mandarin One. Lord Remaker had used his powers to build an arsenal and launched a bomb to Troy Central Control.  But finally, he was ambushed by Malekith the Accursed, who beheaded him and took his ring.

Matter Manipulation: The Matter-Rearranger Ring of the Mandarin allowed Lord Remaker to manipulate the atomic and molecular structures of matter.